Visualization, and the Traditional Art of Magic??

Now, I like to consider myself as being a more traditional magician rather than a "modern magician" as the latter usually comes along with some preconceived notions of Golden Dawn techniques and fringe-freemassonic styled occultism. Though there are some who are much more hard-core traditional than me, as I will never own a lion-skin belt any time soon. But, for the most part I would say I am traditional.

I like to create a dividing line in the history of magic by the use of Mesmer. So occult practices are usual either considered (by me of course) to be be pre-Mesmer or post-Mesmer. 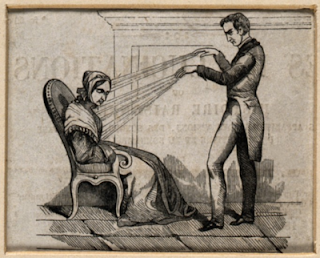 The reason I do this is that it seems to me that Mesmer's Animal Magnetism was the starting theory that led to the modern use of "spiritual energy" (not to be confused with philosophical "energia") in the west. This then was carried onward by the Theosophists, to Lodge-occultists, to the new-age section of your bookstore.

Prior to Mesmer there was no concept of energy as a form of spiritual force like we hear about today in the occult field, but instead what we had were the concepts of Soul, Passions of the mind, and Phantasy. These concepts at times have similar results and actions.

According to Agrippa, the phantasies work upon the passions of the soul, and the soul of course works upon the body. And certainly when the phantasy works upon one's soul it could definitely produce effects called today as self-hypnontic states of hypnotic auto-suggestion. Agrippa hints at this in his opus, Three Books of Occult Philosophy.


"So the soul sometimes is, by a vehement imagination or speculation, altogether abstracted from the body, as Celsus relates of a certain presbyter, who, as often as he pleased, could make himself senseless and lay like a dead man, so that when any one pricked or burnt him he felt no pain, but lay without any motion or breathing; yet he could, as he said, hear men's voices, as it were, afar off, if they cried out aloud."--Agrippa

Not only that, but one's own phantasies and passions can certainly work on another's soul and thus their body.

"The passions of the soul which follow the phantasy when they are most vehement, cannot only change their own body, but also can transcend so as to work upon another body"--Agrippa

So where am I going with this? Well what I am eventually trying to illustrate to some hard-core traditional magicians is that visualization(phantasy) is still a useful part of traditional magic, and its effects are pre-Mesmer even when spiritual energy of the modern magician school is not.

So while I agree that visualizing an entity during a conjuration is purely mental-masturbation and useless, I also know that visualizing the divine names while uttering them or visualizing Christ while speaking of his divine attributes can and often does raise the passions and exert a sense of enhanced divine authority by its action upon the soul/body.

"and, lastly, they have much greater power in the mind; for this, when it is fixed upon God for any good with its whole intention, doth oftentimes affect another's body, as well as its own, with some divine gift. By this means we read that many miracles were done by Apollonius, Pythagoras, Empedocles, Philolaus, and many prophets and holy men of our religion, which things we shall now consider."--Agrippa

This definitely does not mean that circles drawn on the ground via phantasy(visualization) will protect you from ghouls. And it certainly does not mean visualization is the key to make magic work, but within its context can in fact be helpful to those working within the traditional magic field.

P.S. This of course also has an import on scrying, which I will try to get to later.
Posted by Beneath the Firmament at 3:48 PM No comments:

Beneath the Firmament
I am an ensouled body functioning within my station on the great chain-of-being while networking with higher contacts.